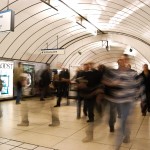 It seems to be getting tougher and tougher to photograph in public places these days without attracting adverse attention, especially when there’s an increasingly heightened public awareness of issues such as terrorism and paedophilia (in no small part stirred up by certain sections of the media themselves). Who knows if Cartier Bresson, Robert Frank, or any of the other great street photographers would have been able to ply their trade in today’s climate, when the public’s being made increasingly wary of people pointing cameras in public.

But there are a few basics that are worth remembering. On the whole, UK law doesn’t prevent photography in public places. This is, of course, assuming that you’re not committing any other offence such as obstructing a police officer from doing their job or holding up traffic by setting up your tripod in the middle of the road. Also, as long as you’re not causing any harassment, you’re allowed to photograph other people if you’re both on public land. If the person you’re photographing is on private land, they could claim a right to privacy, and if you’re on private land, then the owner of the land has the right to restrict photography on their property. How you choose to use the photos later may well be restricted by whether you have a model release or property release, but this is a different matter. It’s worth noting that some places that may seem ‘public’ are in fact private – for example the Royal Parks , shopping centres and other developments such as Canary Wharf. These places will often employ their own security who can request that you show a permit or stop photographing.Also, Trafalgar Square and Parliament Square have certain legal restrictions.  And you should also be aware that if you’re photographing something that could be deemed sensitive to national security, then recent prevention of terrorism legislation could give the police cause to stop you if they believe you to be involved in terrorist activity. They need to be able to prove reasonable suspicion, and in any case can never order you to delete your photos without going through the correct legal process first.

It’s worth reading through the Metropolitan Police’s photography advice which states: “We encourage officers and the public to be vigilant against terrorism but recognise the importance not only of protecting the public from terrorism but also promoting the freedom of the public and the media to take and publish photographs.” This is a useful page which lays out the rights of officers as well as the public and can always be checked if in doubt.

Over the past decade there had been a whole spate of instances where uninformed police had incorrectly demanded that people stop photographing in public or delete images.  Generally speaking now though, police forces do seem to have made an effort to educate officers and appreciate the benefit of good relationships with the media. There have been efforts made by the Association of Chief Police Officers (ACPO) in particular such as guidelines laid out in this letter in 2010 which has helped the situation. Though it’s worth adding you could certainly help your cause by joining an organisation such as the NUJ or the BPPA, both of which are able to provide recognised press cards to their members. To be eligible to join, you will need to be earning a certain proportion of your living from freelance photography related to news. The NUJ also have a student membership scheme and are able to issue their own student press cards. Even if you’re not eligible to join though, it’s worth taking a minute to read the Metropolitan Police guidelines, and it would certainly do no harm to print them out and keep them in your camera bag in case you’re ever challenged, at least in London.

Clearly this shouldn’t be taken as legal advice, but hopefully it will help raise awareness of the difficulties that photographers are increasingly facing in today’s climate, and help give you the confidence to stand your ground when you know that you are doing nothing wrong.